Video and Audio Broadcasting is class for people with passion 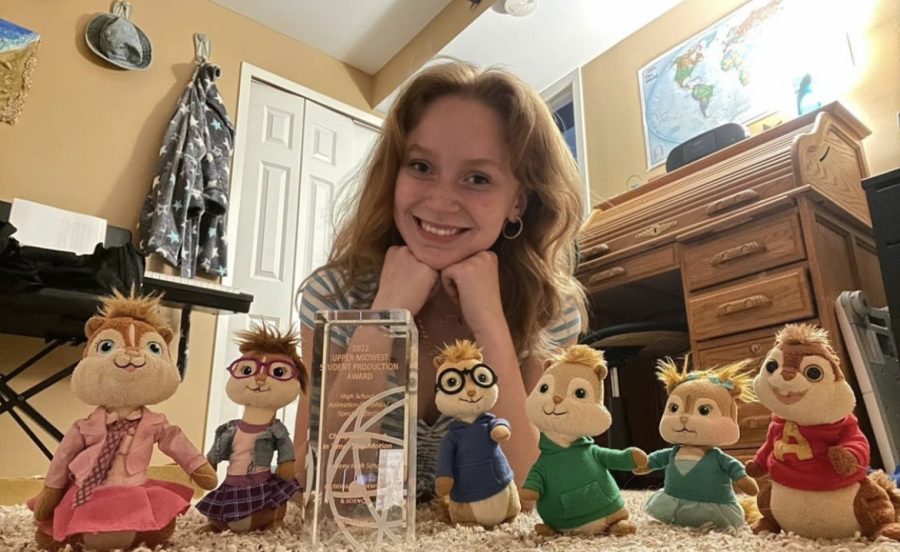 AHS junior Chloe McGrath poses with the stuffed animal chipmunk collection she used to create the video that won her an Upper Midwest Student Production Award from the National Academy of Television and Arts, “Chipmunks Lost in Time.”

Chloe McGrath is a junior at Ankeny High School (AHS) who was nominated to go to the 11th Annual Upper Midwest Emmy Foundation Student Production Awards event in Minneapolis, Minnesota. She went on to win an Upper Midwest Student Production Award from the National Academy of Television and Arts (NATAS). She is a student in Patrick Asmussen’s Video and Audio Broadcasting class.

McGrath has been involved in the arts in some way throughout all of her high school years so far. She has been in choir, last year she tried out acting, and this year she joined Video and Audio Broadcasting.

McGrath has invested several hours into making videos for the class. She says that she spends anywhere from two to fifteen hours on it per week. Specifically on her music video of the song “Dive In” by Pierce The Veil, she spent 42 hours.

“I had planned [the “Dive In” music video] for three months and then I had to execute it in one week,” McGrath said. “It was a lot.”

McGrath says that she thinks of video ideas at random times.

“I heard the song for the first time in November and I remember thinking ‘oh my god… this would be perfect,’” McGrath said. “I was picturing things that I could do for the music video… I pictured the whole thing.”

After McGrath solidifies an idea, she creates a storyboard.

“I had COVID in January, so I made a storyboard then. I didn’t even feel sick, so I was going off planning for this,” McGrath said.

McGrath often stays after class and puts in more hours than she needs to into the class.

“I just enjoy it and I’m a perfectionist, so when I put something out I want it to be the best it can be,” McGrath said.

When it comes to film-creating, there are constantly decisions and changes that need to be made.
“I wanted to film my face through the flames, but the fire wasn’t big enough so I used my ring light and I put it on the orange setting,” McGrath said about one of the aspects of her music video of “Dive in” in which she had to improvise.
Students in the video programming class like the amount of imaginative freedom they have.

“With making videos, you can do so many different things,” junior Klaire Rogers said.

Asmussen says one of his favorite aspects of the class is that students get to have control.

“With this class, I get to say ‘I would like to go over here’ and they get to captain the ship,” teacher Asmussen said.

There were guidelines for the project in which McGrath’s award-winning video called “Chipmunks Lost In Time” had come from. There are things like time requirements, shot requirements, an aspect of film, and deadlines that need to be met for all projects. However, the storyline was left completely up to the imagination.

“I was like ‘Oh, I have chipmunks! But what am I going to do with those?’ I just kind of animated them walking across the screen…. And then I was like ‘Oh wait there’s that song from Alvin and the Chipmunks, “Bad Day”. I could correlate that!’, and then I made it into a whole story,” McGrath said about how her last minute ideas for her “Chipmunks Lost In Time” video came to life.

McGrath enjoys being creative in the class. She also enjoys the opportunities that have come with the class.

“I was able to go to Minneapolis, and I won!” McGrath said.

Asmussen says that Video and Audio Broadcasting class is good for people who are self-motivated and want to create.

“My vision is to see the class showcase talented individuals who are passionate in film and creative building,” Asmussen said. “To see these people excel and develop projects that bring their imagination to life and watch them succeed.”